Opened in 1973, the Tour Montparnasse, the only skyscraper in Paris, is a symbol of the city’s architectural heritage. For many years, it was the tallest building in France and Europe’s highest office block.

Now mostly offices, only the 56th and 59th floors are open to the public, offering unique views over the whole of Paris.

An historic landmark integral to the modern city, the Tour Montparnasse supports the plans, causes and leisure pursuits of its residents.

The Tour Montparnasse works with the local and wider community; it supports research into medical advances and child welfare and gives its backing to major sporting and cultural events in Paris and across France; outstanding national and international events also count on its support and solidarity.

For example, the Tour Montparnasse is backing the “Cure childhood cancer in the 21st century” campaign run by the Fondation Gustave Roussy by displaying the campaign message on the facade of the Tower.

To go even further in its commitment to its wider world, the Tour Montparnasse is now turning another new page in its history as it launches a major renovation project.

The Tour Montparnasse
and the Tour Maine-Montparnasse housing complex

The Tour Maine-Montparnasse housing complex (EITMM) is one of Europe’s largest jointly owned commercial property complexes. Organised into five owner associations (one main association and one secondary association per building), it has some 300 joint owners and 450 tenant companies.

The EITMM covers a total area of around 2.5 hectares in central Paris. It is composed of four buildings: the Tour Montparnasse, the mall, the CIT tower and an office building. 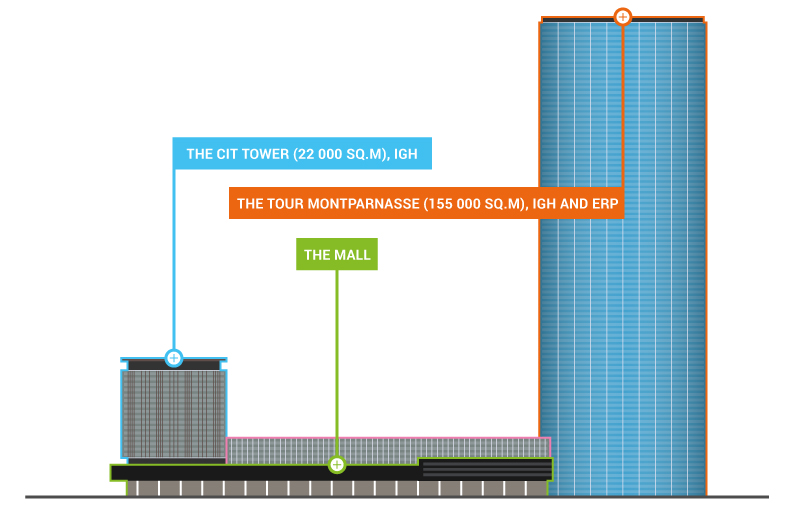 THE TOUR MONTPARNASSE AT A GLANCE

The priority of the Tour Montparnasse’s joint owners continues to be the safety of tenants and visitors who use the property complex.

A Health, Safety & Environment (HSE) unit was set up in 2005. The EITMM formed an asbestos management team in 2005 and work began in 2006. Complicated and demanding, these operations are regulated by prefectoral orders of May 2014 and May 2017. Work is carried out under the supervision of an independent expert in close cooperation with the public authorities.

Since 2014, more than 10,000 air samples have been taken – ten a day on average – with no major incidents reported. The joint owners have also launched a comprehensive programme of works led by an architect to be announced in September. Work is scheduled to begin in 2019. This will mark the completion of its plans to remove asbestos from the building.